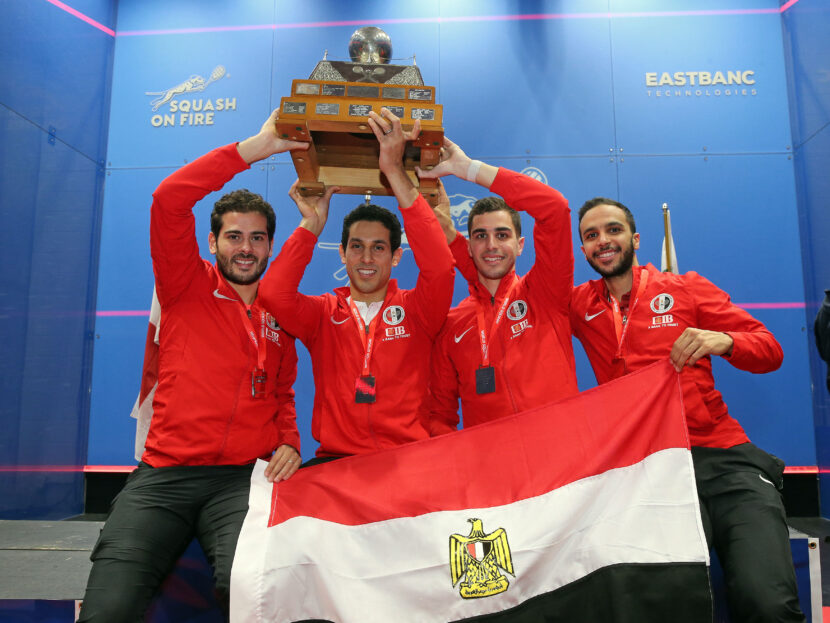 Egypt have retained the WSF Men’s World Team Squash Championship title in the USA, fulfilling their top seeding by beating second seeds England in the final at Squash on Fire in Washington DC.

It was the fifth final between the two powerhouse nations in world squash since 2005 – and the 2-0 victory brings the number of titles won by Egypt to five, equalling the success of their final opponents.

23 nations have been competing in the 26th edition of the championships, hosted by US Squash and held in the USA for the first time in the event’s 52-year history.

It was the final the seeding committee predicted and one the crowd almost certainly wanted to see. It was the fifth meeting between the two nations in the final since 2005 – and Egypt, with four players in the world top eight, were heavily favoured to win the trophy for a fifth time.

Some 18 hours after leading England into the final with a sensational win in the semi-final decider against France, Declan James opened proceedings for the team by facing Egypt’s Karim Abdel Gawad. The Englishman, ranked 29 in the world, took the opening game against Gawad – the World No.3 whom he had never before beaten. Gawad fought back to draw level – then had to take time out to recover from a nose bleed.

On returning to the court, James took the lead for a second time – and, after patiently building up an advantage in the fourth reached 9-7, just two points away from taking the match. But the Egyptian was in no mood to concede easily, and clawed back the deficit before moving ahead to draw level and force a fifth game decider.

The concluding game delivered an awesome display of squash from both players – the capacity crowd unable to believe the mesmerising quality of play on the all-glass showcourt. It was neck and neck throughout the game, the lead changing hands several time before Gawad clinched victory after a video review of let request by James was judged to be ‘no let’.

After the drama of the opener, the second match was a more measured affair – Egypt’s World No.1 Ali Farag looking to extend his unbeaten record over World No.19 Adrian Waller by beating the English number one.

Farag took the first two games and soon reached championship-ball in the third. But Waller had more – and saved 3 match balls before taking the game to reduce the deficit.

Assem Khalifa, the Egyptian Federation President, added: “Every year this event becomes more difficult for us. Other teams are preparing themselves better and better each year. I don’t expect anything.

“You cannot guarantee anything in this event: look at Karim, who had a nose bleed – this was completely unexpected. You have to prepare yourself for the unexpected.

“It’s not enough to come here with No1, No2 and No3 players in the world – because the team event is completely different from the individual event.

“The spirit of the team increases performance by maybe 50%. A lot of players here have been doing unbelievable things because they are playing for their country. You are not playing as an individual, you are playing for your flag, for your country – it is totally different.

“All these players are professional players, they play for the PSA and they play for prize money. But they come here and give for their country, and we appreciate all of them, and this is the beauty of a team event.

“This event is very important for Egypt – you see here our Ambassador has come to support us today – and he would not come to an individual event.

“Squash is the number one game in Egypt, after football. Everybody back home is waiting for us to bring home the trophy.”

Hosts USA took centre stage early in the day to face arch rivals Canada in the play-off for 13th place. It was the two neighbouring nations’ eighth meeting in the event since 1976, but the first with USA able to capitalise upon home advantage.

Second string Christopher Gordon put the 12th seeds ahead, recovering from a game down to beat Canadian David Baillargeon 7-11, 11-4, 12-10, 11-1. The USA top string Todd Harrity was looking for a first victory over experienced opponent Shawn Delierre – and earned it in style before a partisan crowd, winning 11-5, 15-13, 11-8 in 39 minutes to level his country’s ‘head-to-head’ record with Canada, the No.14 seeds, to four-all.

“It’s great to end well,” said Harrity. “I’ve known Shawn for a long time and we’ve had a lot of battles and it’s always a good, fun and intense battle. I think as a team we got momentum throughout the week and I’m happy to have come out on top today.

New Zealand, the fourth seeds who suffered a hiccup in the pool round by losing to ninth seeds Scotland, recovered to fight for fifth place with a battle against Germany.

Meanwhile, Scotland progressed to a 2-1 victory over Spain in the play-off for 7th place – Scotland delighting themselves by exceeding their seeding and Spain also having much to smile about following the country’s best ever finish in 14 appearances in the championships since 1985.

Ireland created a good deal of interest at the beginning of the event, mainly based on the age of the fourth member of the team. Steve Richardson, a 47-year-old who has never been a full-time professional and therefore never had a world ranking, was making his sixth appearance in the championships since making his debut 24 years ago in 1995 – earlier than anyone else in the event.

With only one ranked player in the squad, Ireland made a notable impact on the event – the 18th seeds ultimately beating Jamaica in today’s play-off to finish in 17th place, their best placing since 2007. It was Sean Conroy who clinched victory, beating Jamaican Lewis Walters 12-10, 5-11, 11-7, 6-11, 11-6.