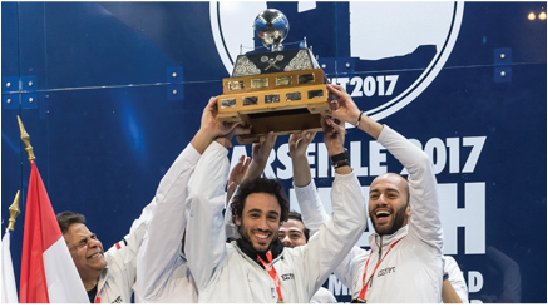 Defending champions Egypt are likely to be favourites for the 2019 WSF Men’s World Team Squash Championship title in December when the USA hosts the biennial World Squash Federation event for the first time in its 52-year history in Washington DC.

23 nations will compete in the 26th edition of the championship which will be held, under the auspices of US Squash, at Squash On Fire, the new state-of-the-art membership-free eight-court facility in the U.S. capital from 15-21 December.

USA will be making their 23rd consecutive appearance in the championships since 1973. The 2019 hosts finished in 10th place in the 2017 championship in Marseille, France – where Egypt claimed the title for the fourth time, beating defending champions England in the final.

South American interest will be led by Colombia, featuring 2018 British Open champion Miguel Rodriguez, who will be making only their third appearance in the championship – as will Republic of Korea, who last competed in 2011.

Whilst 1987 runners-up New Zealand and eight-time champions Australia are two nations which have competed in all previous 25 events, Jamaica will be celebrating only their second appearance after making their debut two years ago in Marseille.

The 2019 championship will also be marking the long-awaited returns of Nigeria and Singapore, who last battled for the men’s title in 1999 and 1997, respectively.

Commenting on hosting the international championship for the first time, Squash On Fire Co-Founder Philippe Lanier said: “Hosting the WSF Men’s World Team Championship at Squash On Fire is an honor – and that it’s is happening in DC is also very exciting. We want to make DC the squash capital of the US, and we can’t wait to welcome players from around the world to our game-changing facility.”

Since its launch in 1967 in Australia, the Men’s World Team Championship has been staged in 12 countries – including Canada in 1977 – but never before in the USA.