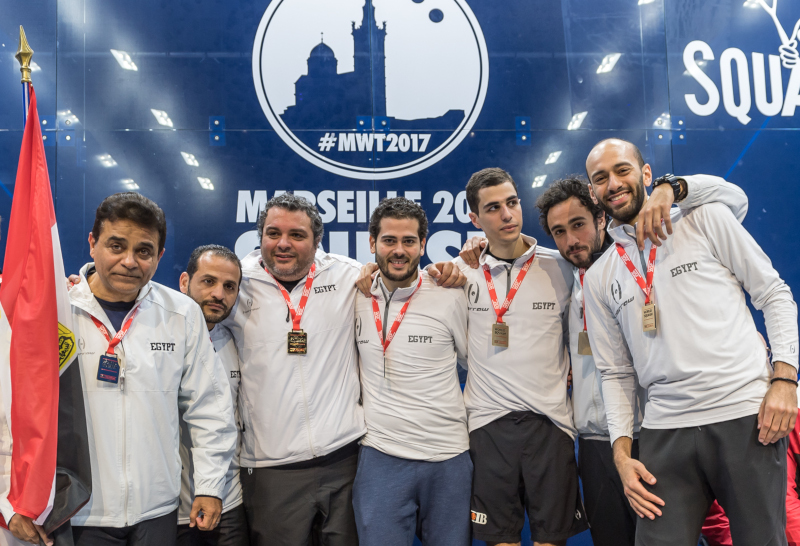 Defending champions Egypt are seeded to win the WSF Men’s World Team Squash Championship title for the fifth time since 1999 when the 2019 championship takes place in the US capital Washington D.C. from 15–21 December.

The biennial World Squash Federation championship will be staged in the USA for the first time in its 52-year history.  23 nations will compete in the 26th edition of the event, hosted by US Squash, at Squash On Fire, the new state-of-the-art eight-court facility in Washington.

Egypt, led by World No.1 Ali Farag and including Karim Abdel Gawad, Tarek Momen and Mohamed Abouelghar – ranked 3, 4 and 8, respectively, in the world – reclaimed the trophy from 5-time champions England in the 2017 championship in France after title success in 1999, 2009 and 2011.  Farag and Gawad were both members of the victorious 2017 team.

The final is predicted to be an Egypt/England battle for the fourth time in a row.  Former World No.1 James Willstrop, 36, will be celebrating a record eighth successive appearance for England in the Washington championship after making his debut in 2003 and playing his part in three title-winning teams.

The second seeds’ squad will also feature Adrian Waller, Daryl Selby and Declan James – ranked 19, 21 and 29, respectively, in the world.

Hosts USA will be making their 23rd consecutive appearance in the championships since 1973.  Seeded in 13th place, the 2019 squad will be led by World No.55 Todd Harrity, and include two fellow former US national champions Chris Hanson and Christopher Gordon, together with event debutant Andrew Douglas.

France are the third seeds and will be keen to make up for their surprise failure to make the last four in 2017 – on home soil – for the first time since 1999.

Making his much-hailed return to the squad after a 14-month injury lay-off will be former World No.1 and World Champion Gregory Gaultier, who will be marking an event-record 10th successive appearance in the championships.  The 36-year-old will joined by Gregoire Marche, Mathieu Castagnet and Baptiste Masotti.

Germany are seeded to make the last four for the first time in 18 appearances in the event since 1981.  Led by World No.6 Simon Rösner, the squad also includes Raphael Kandra, Valentin Rapp and Rudi Rohrmuller.

Whilst 1987 runners-up New Zealand and eight-time champions Australia are two nations which have competed in all previous 25 events, Jamaica will be celebrating only their second appearance after making their debut two years ago in Marseille.

The 2019 championship will also be marking the long-awaited returns of Nigeria and Singapore, who last battled for the men’s title in 1999 and 1997, respectively.

Irishman Steve Richardson has the distinction of being the oldest competitor in the championship – and one of the few players never to have held a World Ranking.

The London-based 47-year-old – a full nine years older than his nearest rival in Washington – made his debut for Ireland in the 1995 event in Cairo, and will mark his sixth appearance later this month.

Since its launch in 1967 in Australia, the Men’s World Team Championships have been staged in 16 countries, but never before in the USA.

The 23 teams will compete initially in six pools from 15-17 December, before progressing to the knockout stage from 18 December, through to the final on Saturday 21st December.

The full pool line-ups, including team seedings in brackets, are: