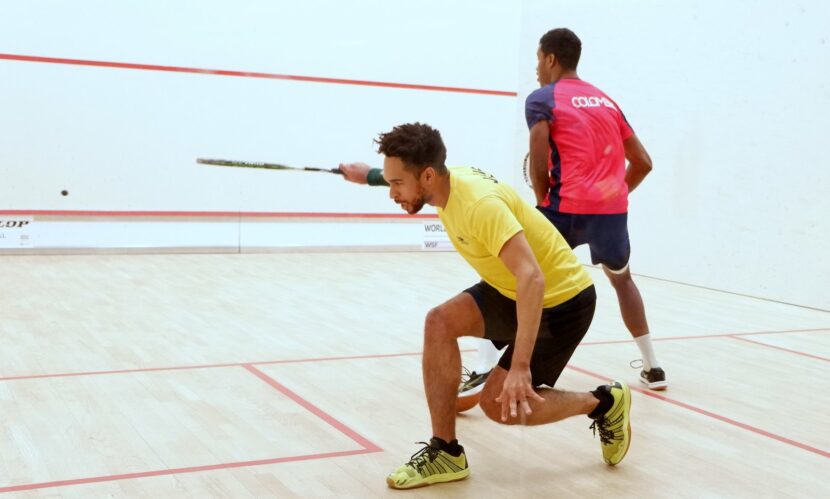 There was plenty of action on finals day surrounding the lower placings of the WSF Men’s World Team Championships in Washington, D.C.

From the 5-6 final right the way down to the 22-23 round robin finale, there were places on offer for the majority of nations on the last day of action at Squash on Fire

Spain’s Carlos Cornes had to fight to get the better of Scotland’s Rory Stewart in the first rubber of the 7-8 bracket final in Washington.

Cornes led twice, having won both the first and third games, but was unable to keep his lead, as Stewart fought back to win both the second and fourth games, taking the match to a decider.

Greg Lobban levelled up Scotland’s tie with Spain in the 7-8 bracket final, as he downed Borja Golan in a tough four-game battle, which lasted over an hour.

The World No.27 knew he had to win after seeing his compatriot lose the first match, and he took the first on a tie-break. However, Golan fought back to level it at 1-1 thanks to a 12-10 win of his own.

It would be Lobban that took the victory over the experienced Spaniard, though, as he took the final two games to equalise for Scotland, sending it into a deciding match.

Alan Clyne sealed victory for Scotland after Spain’s Iker Pajares had to retire from their decider through injury.

Clyne had taken the first game 11-0, but halfway through the second, Pajares had to retire, gifting Scotland the victory, and 7th spot in the competition.

Oisin Logan gave the Irish the lead over Jamaica, as he completed a straight game victory over Tahjia Lumley in the third string match of the 17-18 bracket final.

The Irishman conceded just twelve points across the match, as he did not allow Lumley to find his game. He won in 25 minutes, giving Ireland the advantage over Jamaica.

Sean Conroy came through a tricky five-game battle with Lewis Walters to give Ireland an unassailable lead in their tie with Jamaica.

Conroy took the first on a tie-break, but that spurred Walters on to level the match. The same pattern occurred across games three and four, but it was Conroy that took the final game to win the match 3-2, giving Ireland a 2-0 lead, securing 17th spot in the tournament.

The match between Burce Burrowes and Arthur Gaskin was not played as Ireland had already won the tie.

South Africa took the first rubber of their 19-20 final clash with Colombia, thanks to Gary Wheadon getting the better of Erick Herrera in four games.

It was the Colombian who took the first game 11-9, but Wheadon was able to fight back, to take the second game 11-6, levelling the score in the match.

The South African, ranked World No.298, then started to show his qualities, and he was able to come through the match in four, giving his country the early advantage.

In the second match of the tie, Juan Camilo Vargas prevailed over Jean-Pierre Brits to bring Colombia level with South Africa.

He took the first game with relative ease, but Brits fought back in the second, taking it all the way to a tie-break. Vargas won it though, and with it he broke the spirit of the South African, taking the third 11-4 to make it 1-1 in the tie.

After falling behind in the deciding rubber, Christo Potgieter came back to take the victory, securing 19th spot in the tournament for South Africa.

He fell behind to Colombia’s Ronald Palomino after losing the first game 11-8, but fought back to win the next three to seal the win that South Africa needed.

New Zealand’s Evan Williams has given his country the lead over Germany in the 5-6 bracket playoff, after he downed Valentin Rapp in the first rubber between the nations.

Williams started strongly, allowing the German to score just a single point in the first game, and although Rapp fought back, it would be the Kiwi that won in three to give New Zealand the early lead.

World No.5 Paul Coll got the better of World No.6 Simon Rösner to secure New Zealand a 5th place finish at the Men’s World Team Championships.

The match went to five games, with Coll leading twice, but the German ‘Tree-Chopper’ was able to pull it back in both the second and fourth games. It would be the Kiwi that took victory, though, winning the fifth 11-3 to secure 5th place.

The match between Campbell Grayson and Raphael Kandra was not played due to New Zealand having already won the tie.

Kuwait took the early lead in their 15-16 bracket tie against Argentina thanks to Ali Alarmezi, as he defeated Jeremias Azena in four games.

The Kuwaiti won the first two games comfortably, but Azena tried to come back into it. He won the third game 11-4, but Alarmezi regained his form to win the fourth and put his country 1-0 up in the tie.

The second match of the tie was the one that seal 15th spot for Kuwait, as Ammar Altamimi downed Robertino Pezzota in just 22 minutes.

The Argentinian was suffering from terrible blisters, but the Kuwaiti took no prisoners, allowing Pezzota just six points across the three games.

The match between Leandro Romiglio and Abdullah Al Muzayen was not played due to Kuwait having already won the tie.

Joong-Won Hwang defeated Brandon Tan to give the Republic of Korea the early advantage over Singapore in the 22-23 playoff.

The Korean looked comfortable in the beginning, as he took the first two games 11-6, but Tan fought back to take the third by the same scoreline.

However, it would be Hwang that took the victory, as he won the fourth game on a tie-break to put the Republic of Korea 1-0 up in the tie.

Samuel Kang forced the tie into a deciding match, as he got the better of Se Hyun Lee in the second rubber between Singapore and Republic of Korea.

Chang-Wook Woo got the better Chua Man Tong to seal 22nd place for the Republic of Korea at the Men’s World Team Championships.

The Korean defeated the Singaporean in four games to take the victory, sealing Singapore’s feat as the bottom team in the tournament.