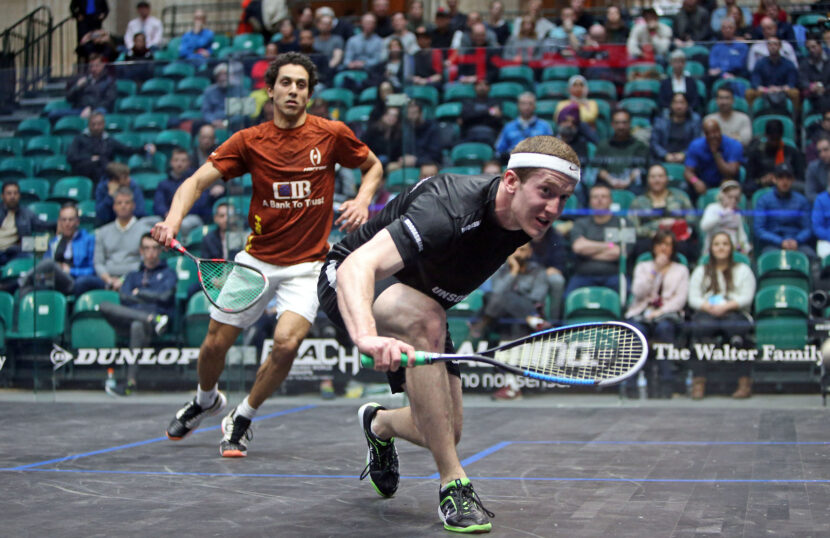 Hosts USA will now face top seeds and title-holders Egypt in a dream opening tie in the WSF Men’s World Team Squash Championship which gets underway tomorrow (Sunday) at Squash On Fire in Washington DC.

Formerly the 13th seeds, USA have been elevated to 12th seeds and moved into the Pool A group following an 11th-hour revision of the seedings caused by the late withdrawal of Switzerland’s world No.30 Nicolas Müller. The Swiss No.1 sadly had to return home following the death of his mother.

The weakened Switzerland team has been re-seeded at 15, raising USA to 12, Colombia to 13 and Canada to 14. All other seedings remain the same.

“It’s a Sunday, so more people can come, so for us it’s great – a good strong match to get us into the competition,” said US coach Thierry Lincou (pictured below, 2nd from right, with the US squad on the Squash On Fire showcourt) on hearing the news.

“And now we have our eyes on that other match that could qualify us for the play-offs. It’s lucky for us – originally we would have had to beat Malaysia, seeded above us, and Korea, to get into the play-offs. Now it looks like it’s more do-able.

“We want to make sure that everyone is healthy and ready for the week ahead,” added the former world No.1.

New Zealand are also looking to make an impression on the event at Squash On Fire. With a seeding of four, the Kiwis are predicted to record their best finish since 1989.

National coach Glen Wilson was upbeat about his side’s chances on the eve of the event: “We’ve got a pretty similar team to two years ago and the guys are slightly better on ranking and playing form – so we’re expecting good things from each other.

“But we’re not looking too far ahead. We are seeded four so we know there’s a bit more expectation on us, but we’re just focussing on getting through the pool first – to win the pool is our main goal.

“To get as high as we did 30 years ago would be an amazing achievement – but we’re five or six days away from that!”

The squad is led by ‘Superman’ Paul Coll, the world No.5 who is the country’s highest-ranked male player since Ross Norman, the 1986 World Champion.

“Any time a New Zealander does well in any sport it gives the people a big buzz,” Wilson continued. “To see a young guy from Greymouth – which is quite a remote little town on South Island – reach the heights that Paul has done is inspiring for us and good to show the young Kiwi guys that it is possible.

“He’s shown that even though we’re so far away from the rest of the world, we can do it!”

Second seeds England are also hoping to extend an impressive record: the five-time champions have never finished outside the top four in 38 years since their debut in 1981. The team will include former world No.1 James Willstrop, aged 36, and 37-year-old Daryl Selby – who will be making their 8th and 4th appearances in the biennial event, respectively.

“We’re seeded two,” said national coach David Campion. “We’ve got experience and we’ve got age. James and Daryl are both playing really well still – and at their age, it’s incredible, really, the level they’re able to play at.

“France, Hong Kong, Germany – there are plenty of teams who could cause an upset to us. We just have to go in and work hard, and play with expression and be free.

“If the guys play to their level, hopefully we can make the final and give Egypt a bit of a run.”

The 26th edition of the biennial World Squash Federation championship, featuring 23 nations, is being hosted by US Squash at the new state-of-the-art eight-court Squash On Fire facility from 15-21 December.

Today’s revised pool line-ups, including team seedings in brackets, are:

The full new Pool schedule is as follows: