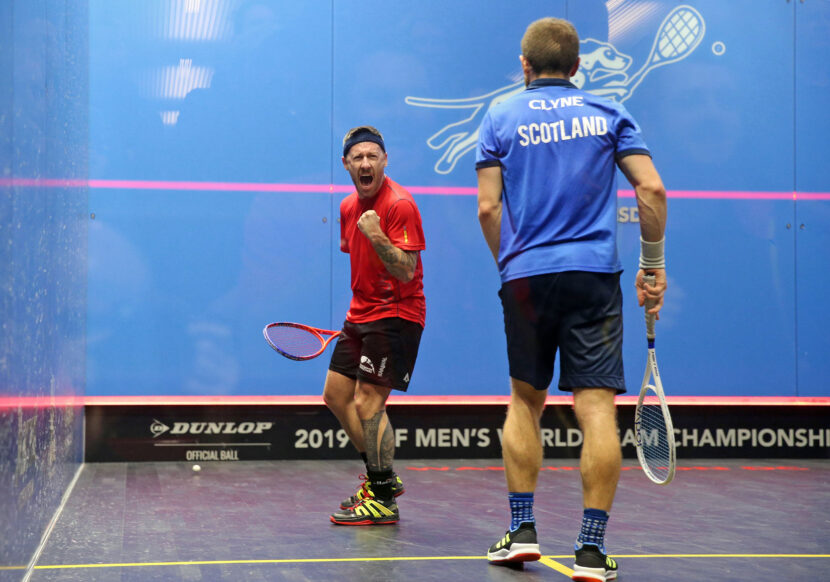 While Egypt, England and France secured semi-final slots as predicted by the seedings, it was 11th seeds Wales who created the headlines on day five of the WSF Men’s World Team Squash Championship in Washington DC after beating British rivals Scotland to earn a place in the last four for the first time for 20 years.

23 nations are competing in the 26th edition of the championships, hosted by US Squash, at Squash On Fire, the new state-of-the-art eight-court facility in the US capital.

Boasting three players in the world top four, Egypt are surely the strongest favourites the event has ever seen. Yet the title-holders were taken the full distance by Germany, the fifth seeds who suffered a surprise defeat to lower-seeded Spain in the qualifying rounds.

Egypt’s world No.3 Karim Abdel Gawad was first on court to face Raphael Kandra, the Germany No.2 whom he had never before faced. As expected, Gawad romped to a 2/0 lead against the world No.28 and looked set to open a one-game lead for the top seeds.

But underdog Kandra was far from overawed by the former world champion and hauled back the deficit, taking the next two games to force a decider. Gawad, a recognised five-game expert, soon regained the initiative, however, and after 58 minutes closed out the match 11-8, 11-5, 9-11, 8-11, 11-4.

It was the number ones who were then on court – Egypt’s world No.1 Ali Farag boasting a 7/5 head-to-record over Simon Rösner and four recent wins in succession. But it was the German who was control in the early stages, building up a two-game lead.

Farag fought back to level the match – but the tall and imposing German, ranked 6 in the world, regained the momentum to reach match-ball at 10-3. With crowd on the edges of their seats, Farag clawed back point after point before Rösner finally celebrated his 6-11, 8-11, 11-9, 11-5, 8-11 upset after 73 minutes.

It was left to the Egyptian number four Mohamed Abouelghar, ranked 8 in the world, to clinch his country’s predicted victory when he beat Valentin Rapp 11-3, 11-7, 11-7 to put Egypt into the semis for the 12th time in a row.

“Before the match started, I was talking to Ali – we made sure that none of us relaxed, no matter what happened and I think that helped a lot,” said Abouelghar after the match. “Before Ali’s match, I knew that if he won that mine would be a dead rubber, but I didn’t go with that mentality and I warmed up and was ready for the match and I’m very happy to help the team get the win.

“On the squash court there are no favourites, on paper we’re the strongest but in a team event when things get tight the nerves are very high and I’m very happy to have held my nerves today.

“It’s a tough match with Wales and Scotland both of their No.1s are really strong, we will just watch and see what happens.”

Later, it was Wales who claimed the right to face Egypt – beating British rivals Scotland 2/0 to claim a semi-final berth for the first time since 1999.

Incredibly, the tie marked the first time the two countries had met in the championships since 1995 – when coach David Evans led them to a 3/0 win.

It was a 2/0 win over sixth seeds Hong Kong that propelled Wales, the 11th seeds, into the quarter-final clash with 9th seeds Scotland.

“Creedy played a joke there, he didn’t make many errors and was attacking,” said the jubilant Makin afterwards. “When he’s moving well like that he’s really hard to break down, so I knew I had to play well and wrap it up.

“I knew I just had to be solid and he was so broken up and it’s not the way you want to play but that’s what you have to do in these kind of situations is just get through them.

“Emyr (Evans) closed out a big win yesterday and Creedy did the same today. We back ourselves, we are a good team and we did well today.”

Welsh coach David Evans, a former British Open champion, was equally upbeat: “I’m very, very pleased. Coming here, we were looking for a top eight finish, for our funding, but when the draw opened up it was a massive opportunity for the boys – and they’ve taken it with both hands.”

On the fact that it is 24 years since the nations last met in the event, Evans said: “We play Scotland a lot in the Europeans – but on a three-man team, there’s a different dynamic. But they were probably thinking the same today, that there was a massive opportunity to get through to the semi-finals. And, luckily, now we’re here.

“We’re playing Egypt now, the number one seeds – but as you can see, Germany took them very close today – and with only three players in the team, anything’s possible.

“Joel, our number one is capable of beating anyone in the world at the moment. I know our boys will give it everything.”

Seasoned campaigner James Willstrop, a 36-year-old veteran of seven previous campaigns, put England into the lead after seeing off lower-ranked Kiwi Campbell Grayson – but ‘Superman’ Paul Coll, the world No.5, restored the balance for New Zealand after a straight games dismissal of the English number one Adrian Waller.

On paper, the decider would be expected to go England’s way – but world No.21 Daryl Selby was given a scare as Kiwi Evan Williams, ranked over 70 places lower, took the opening game.

England have now extended their remarkable record of never having finished outside the world top four!

“Obviously I’m feeling good after getting the win but also a little emotional,” said Selby later. “It’s tough because I know this is probably my last Worlds, so playing in a team environment again is always very special and different – you can see that in the way players play.

“Nothing is done until it’s played, on paper I probably should win without it being as tough as that but Evan showed what a good player he is. He played great squash, put me under a lot of pressure and I was probably a bit lucky to get it done in four.

“I always fancy myself to come back from two games down anyway, so that is a little safety net in the back of your head, but I’ve got a lot of experience and I need to use that at crucial times. I didn’t play great today, but that was probably a lot down to him because he nullified my game, but a win’s a win.”

Former world No.1 and World Champion Gregory Gaultier opened proceedings for France – but soon found the going tough as Spaniard Iker Pajares Bernabeu survived the marathon 84-minute encounter to win in four games and put the underdogs ahead.

It was left to experienced Frenchman Mathieu Castagnet to seal the win, beating Spain’s Carlos Cornes 3/0 to put France back into the last four after a shock 2017 fifth place finish in 2017 on home soil.

There was a notable achievement on one of the side courts at Squash on Fire when Nigeria, the 23rd seeds competing in the event for the first time for 20 years, beat higher-seeded Republic of Korea 2/0 to claim their first win of the tournament.

The four-man Nigerian squad had planned to be in Washington for two weeks to acclimatise and prepare – but at the eleventh hour were denied visas for two of their players, and were forced to replace them with two coaches based in the USA.

Despite not winning a match in the previous rounds, the Nigerians have impressed – on several occasions taking considerably higher-ranked opponents the full distance.

“I am pleased with way the guys have been playing – most of the matches have been close,” said Nigerian federation President Boye Oyerinde. “In our first match, our number one played Joel Makin, who is 12 in the world – and it was so close. And our No.3 played well in several matches, but still lost.

“I’m so happy that, despite everything, we now have something to smile about!

“Our number one is based in the States, he plays out of New Jersey and plays on the Tour. Our number two came in the day before the match, arriving in the evening after a 14-hour flight, so it wasn’t the best preparation. Despite that, he put in a good show.

“And the last two came in at the last moment when we couldn’t get the other two players in because of visa problems – and they are also based in the States, but are not really playing actively as they are coaches. We have two young players back home who we really wanted to be here to get the experience.”