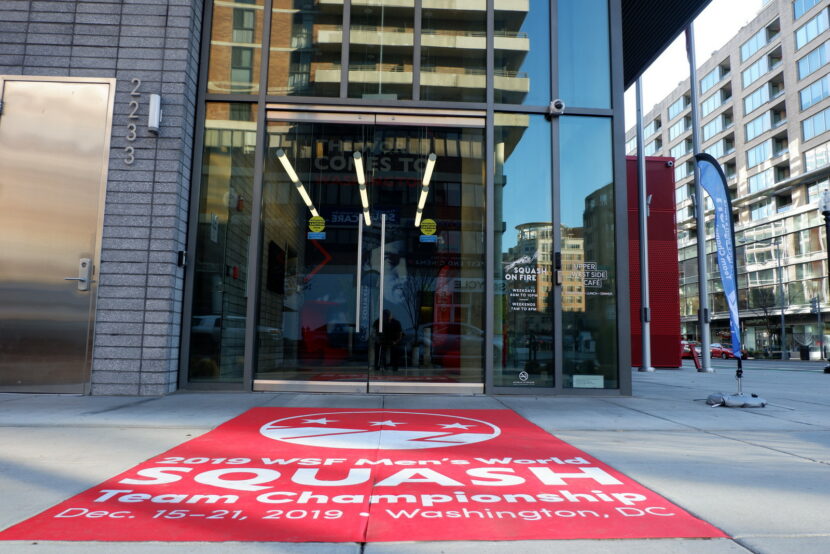 The second session of side court matches saw Germany take on Argentina, Spain play South Africa and Malaysia take on the Republic of Korea.

Two of the ties were won 3-0, but one tie went all the way to the end as the Germans needed to win the third of their matches against Argentina to secure victory.

Leandro Romiglio played some amazing squash to give Argentina the early lead against Germany, after a battling four-game performance.

The World No.166 lost the first game, and could only tally four points during it, but was able to fight back to win 3-1 in the match, the longest of the tournament so far.

Germany’s No.2, Raphael Kandra, brought his country back level with Argentina thanks to a comfortable victory over Robertino Pezzota.

The World No.28 won the first two games comfortably 11-7, before then restricting his Argetinian opponent to just three points in the third game.

With the win, Kandra drew the two teams level ahead of the deciding match between Rudi Rohrmuller and Gonzalo Miranda.

Germany took the overall victory over Argentina thanks to Rudi Rohrmuller winning the final match of the tie, beating Gonzalo Miranda.

The German’s needed to win to maintain their position as the top seed in the group, and Rohrmuller delivered in straight games.

Iker Pajares Bernabeu took a comfortable victory over South Africa’s Christo Potgieter to give his home nation of Spain a 1-0 lead in their Pool C tie.

The Spanish No.1 restricted his South African opponent to just five points in each game, as he ran out an 11-5, 11-5, 11-5 winner inside half an hour.

The second match of this tie saw Borja Golan defeat Jean-Pierre Brits to double the Spanish lead, and give them the victory over South Africa.

Golan won the first game with ease, restricting Brits to just three points. The South African fought back in the second to lead towards the end, but the experienced Spaniard was able to fight back to take it 11-9.

He then went on to win the third in a much easier fashion to guarantee a victory for the Spaniards on the first day of the tournament.

Carlos Cornes Ribadas secured a whitewash victory for Spain over South Africa, as he got the better of Gary Wheadon in straight games.

Cornes won the first two games rather comfortably, 11-5 and 11-3, but he found the third game much tougher, with Wheadon aiming to fight back.

The South African had his chances in the third game, but it was eventually the Spaniard that took it 13-11, to seal the match and a 3-0 win for his country.

The first clash between Malaysia and the Republic of Korea went the way of the Malaysians, with Ivan Yuen defeating Chang-Wook Woo in straight games.

The World No.51, who currently sits at his highest ever spot in the World Rankings, took the first couple of games with relative ease, restricting the Korean to just five points.

The third game saw Woo fight back, but in the end, Yuen had just too much for his opponent, sealing the victory to Malaysia an early lead in the tie.

World No.31 Eain Yow Ng defeated Youngjo Ko in the second match of the Malaysia-Republic of Korea tie to guarantee the No.10 seeds the win.

Eain Yow took a tight first game, in which Ko pushed him all the way, but the 11-9 win for the Malaysian proved to be vital, as he then held the momentum throughout the match.

He then won the second 11-2 before sealing the victory in the third game, make it two wins out of two for the Malaysian team against the Republic of Korea, sealing their win in the tie.

Malaysia’s Mohammed Syafiq Kamal took victory over Joong-Won Hwang in straight games to complete a 3-0 win for his country on day one in Washington, D.C.

The first game saw Ko start to apply pressure to the favoured Malaysian, but it was eventually Kamal that took the early lead in their match.

The World No.87 came through against the South Korean in a tough three-game battle to secure the 3-0 win for his country.