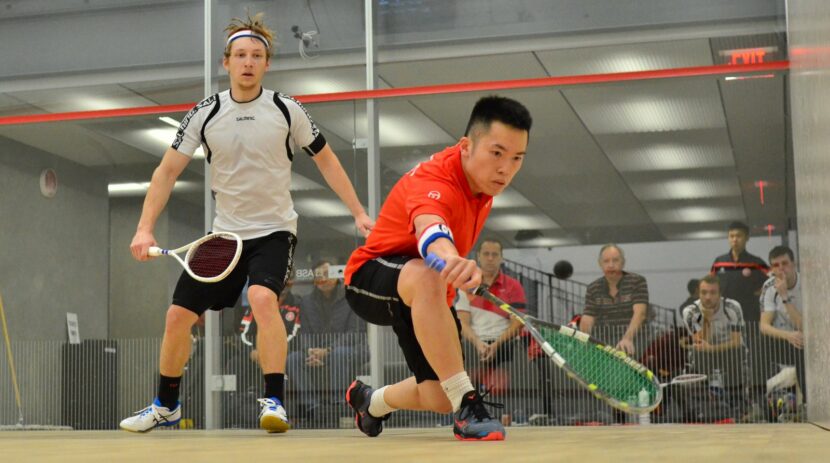 The penultimate day of the 2019 WSF Men’s World Team Championships in Washington, D.C. saw plenty of action around the courts, with placings still be to decided in the lower brackets.

There were nine matches across the consolation brackets throughout day six at Squash on Fire, with the United States, Germany and New Zealand all featuring.

Eain Yow Ng gave Malaysia the early advantage in their clash with Australia in the 9-10 playoff final, as he downed Cameron Pilley in a cracking five-gamer in Washington.

The World No.31 fell behind in his match with the experienced Pilley, as the Australian took a lengthy first game on a tie-break 14-12.

The Malaysian fought back to take the next two games 11-6, but Pilley was able to force the match into a decider. It would be Ng that took the win, though, winning the fifth 11-4, giving his country the advantage in the tie.

Pilley said: “It was tough when Cusk hurt himself mid-event and as soon as that happened, I knew I’d have to play every match.  We knew we had to stick in there and do the best we could.  It’s been a good event though, it’s been fun.  It’s exactly what you know it’s going to be – a hard week of tough squash!”

The 9-10 bracket was sealed by Ivan Yuen who took victory over Rex Hedrick of Australia to give Malaysia a 9th place finish in the event.

The first game was crucial, with Yuen taking a 24-minute epic on a tie-break, and with it, he claimed the momentum in the match.

After that, the Malaysian restricted Hedrick to just twelve points across the next two games, as he won the match to secure 9th place for his country.

The match between Mohammed Syafiq Kamal and Zac Alexander was not played due to Malaysia having already won the tie.

Leo Au gave Hong Kong China the lead over Switzerland in their 11-12 final clash, as he defeated Dimitri Steinmann in straight games.

Hong Kong’s No.1 restricted Steinmann to just four points in the opening game, as he showed his dominance. Although the Swiss man played better in the second and third games, it would be Au that took the win, putting Hong Kong China in front in the match.

After a couple of days out of the team, Max Lee returned to action for Hong Kong China and his victory saw them seal 11th spot in the competition.

Lee twice had to come from behind against Swiss No.2 Seiko Peter, having fallen behind 1-0 and 2-1 during the match. After falling behind a second time, the World No.37 was able to recover to win both the fourth and fifth games to seal the victory.

With Hong Kong China already assured to the victory in the tie, Tsz Fung Yip and Cedric Kuchen played out a best-of-three, with Yip taking the win.

He won the match in just 15 minutes, as Hong Kong China finish the tournament in 11th place.

Babatunde Ajagbe gave Nigeria the early advantage over Singapore, as he defeated Samuel Kang in the second tie of the 21-23 bracket round robin group.

Yesterday, the Nigerians got the better of the Republic of Korea, and they continued that form here, with Ajagbe winning 3-1, despite losing a game 11-0.

The World No.167 took the first two games 11-9 and 12-10, before then failing to score a point in the third. However, he returned to form in the fourth, taking it 11-5 to give Nigeria the lead in the match.

Sodiq Oluwatobi Taiwo secured a second victory for Nigeria in the 21-23 bracket round robin group, as he defeated Singapore’s Chua Man Tong, with the victory sealing 21st spot for the country.

Taiwo won in straight games over his Singaporean opponent, but he had to battle to take the second game, winning it on a tie-break 12-10.

The victory sees Nigeria secure 21st spot in the tournament, with Singapore and the Republic of Korea facing off tomorrow for 22nd and 23rd places.

Tan Pulls One Back For Singapore

The final rubber of the match went to Singapore, as Brandon Tan downed Ehimen Ehalen in just 22 minutes.

The Singaporean No.3 seed played some great stuff in the first game, as he restricted Ehalen to just four points. Although the Nigerian tried to fight back, Tan had too much, and he took the victory.

World No.6 Simon Rösner got the better of Scotland’s No.1 Greg Lobban to give Germany the advantage in their 5-8 bracket semi final.

The ‘Tree-Chopper’ needed less than 40 minutes to get the victory, with the Germans looking to bounce back after their loss to Egypt on Thursday.

German No.2 Raphael Kandra sealed the win for his country over Scotland in their 5-8 semi final after he defeated Alan Clyne in a tough four-game battle.

The pair both played some great squash in the first, but it was the Scotsman who took it 11-8. Kandra replied by taking the second by the same scoreline, and he then took the momentum through to win the match 3-1.

With the victory, Germany are now guaranteed of at least a top six finish, and will face either Spain or New Zealand in the 5-6 final on Saturday afternoon.

The match between Valentin Rapp and Rory Stewart was not played due to Germany having already won the match.

Jamaican No.1 Christopher Binnie gave his country the advantage over Colombia, as he defeated Juan Camilo Vargas in straight games.

The sides were battling it out in the 17-20 semi finals, with a place in the 17-18 final at stake. Binnie started well, taking the first 11-7, and he carried on that momentum.

The Jamaican, who sits at World No.90, was able to close out the match in straight games, taking the victory in 33 minutes to put his nation 1-0 up.

Lewis Walters gave Jamaica the overall victory in the tie, as he got the better of Ronald Palomino to give the Caribbean nation an unassailable lead.

The Jamaican went behind to Palomino, who took the first game 11-7, but came back to win the match in four, booking Jamaica’s place in the 17-18 final.

The final rubber of the tie was still played, despite the match being over, with Erick Herrera taking a 2-0 victory over Bruce Burrowes in a best-of-three.

Paul Coll gave New Zealand the early advantage in their clash with Spain in the 5-8 semi finals, as he got the better of Borja Golan in the 1st string match-up.

The World No.5 lost the first game to the experienced Spaniard, but was able to battle back to take the second and level the match at one apiece.

Coll then carried that momentum through the next two games to win the match 3-1, giving New Zealand the lead in the tie ahead of the second match-up.

New Zealand No.2 Campbell Grayson secured the Kiwis a place in the top six of the Men’s World Team Championships as he beat Spain’s Iker Pajares.

Grayson showed some great touch in the opening exchanges and he ran out into a 2-0 lead in no time, taking the first two games 11-5, 11-6.

However, Pajares fought back by taking the first seven points of the third, and he took it 11-5, but it would be the Kiwi that got the win, sealing it after the fourth game to put New Zealand into the 5-6 final against Germany on Saturday.

The match between Evan Williams and Carlos Cornes was not played due to New Zealand having already won the tie.

Shawn DeLierre has won the 1st string match between Canada and Kuwait, as he downed Ammar Altamimi in the first rubber of their 13-16 bracket semi finals clash.

The Kuwaiti was the player to start the stronger, as he won the first game 11-5, but from there, DeLierre seemed to step up a gear as the match went on.

The Canadian won the next three games, including a pivotal tie-break in the third 12-10, to take the match and put his country 1-0 up in the tie.

Abdullah Al Muzayen kept Kuwait’s hopes of a top 14 finish at the Men’s World Team Championships alive, as he got the better of Michael McCue.

The Kuwaiti needed just 34 minutes to secure the victory, as he comfortably came through the 2nd string tie between the teams, as he won it 11-5, 11-8, 11-8 to level up the match.

It will be Canada that play in the 13-14 final against the United States after David Baillargeon downed Ali Alarmezi to give Canada a 2-1 victory over Kuwait.

The Canadian No.3 wasted no time in getting the victory over Alarmezi, as he allowed the Kuwaiti to score just eleven points across the entire match.

Ireland’s Sean Conroy gave his nation the early advantage over South Africa in their 17-20 semi final clash, as he beat Jean-Pierre Brits in five games.

The Irishman got the perfect start, as he won the first game 11-7, and after coming through a tough tie-break in the second, it looked like he had the momentum to win in three.

However, Brits fought back, taking both the third and fourth to equalise, but Conroy was able to prove his worth, winning the deciding game 11-4 to give Ireland a 1-0 advantage in the tie.

Arthur Gaskin gave Ireland the win they needed to advance through to the 17-18 final, as he defeated Christo Potgieter in straight games.

The Irishman had to fight to win the first game, as he had to take it on a tie-break 13-11. The second was also close, with Gaskin taking it 11-8, before he then took all 11 points in the third to close out the match. Ireland will not play Jamaica in the 17-18 final.

The match between Oisin Logan and Gary Wheadon was not played due to Ireland having already won the tie.