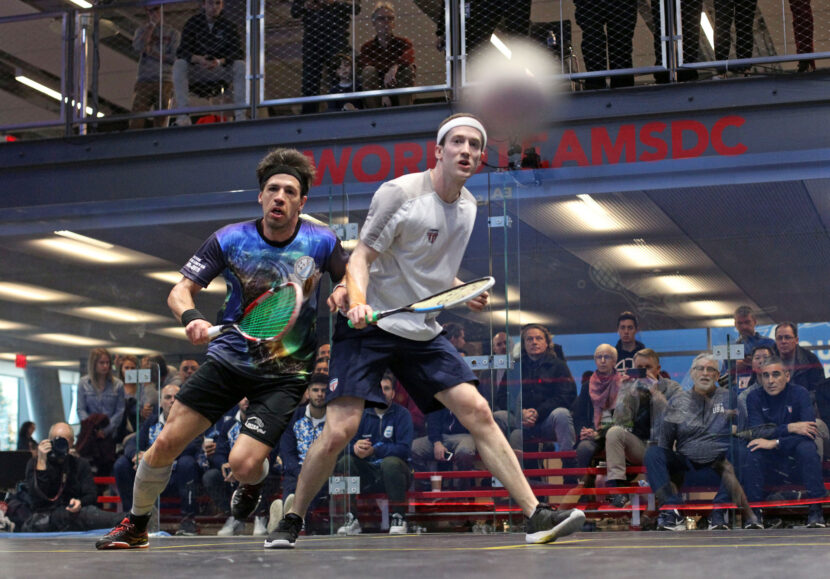 The first match of the day sees host nation USA go head-to-head with Argentina for place in the 13-14 final at the WSF Men’s World Team Squash Championship taking place in Washington DC this week at the Squash on Fire complex.

Home favourites USA were left disappointed after they were knocked out at the pool stage having fallen to both defending champions Egypt and surprise package Switzerland. They got their campaign back on track yesterday with a win over Jamaica and will hoping to continue that momentum to secure a 13th finish, should they defeat Pan American Championship rivals Argentina.

Home favourite Todd Harrity gave USA the lead over Argentina after he defeated Robertino Pezzota in the 13-16 bracket in Washington DC.

World No.55 Harrity and Pezzota have met just twice before in their careers with each player taking a match each. However, it was Harrity who ensured he snuck ahead in the head-to-head as he prevailed in an 11-5, 8-11, 11-6, 11-7 encounter.

Argentina’s World No.166 Leandro Romiglio caused an upset to take out World No.113 Andrew Douglas in four games to level the scores for Argentina in their clash with the USA.

Romiglio started strongly to take the opening game and put Argentina in strong contention before Douglas battled back in the second.

Gordon Secures Victory for the USA

World No.88 Christopher Gordon secured victory for the USA after overcoming Argentina’s Gonzalo Miranda in straight-games in the deciding match of the tie.

USA will now face either Kuwait or Canada in the 13th place decider tomorrow.

“I was really excited to play today,” said Gordon. I’m feeling really fresh and I’ve been making sure that I’m prepared all week for these moments. I love playing for the US and being able to play a deciding match, I was really happy to get out there and play today.

“I’ve played Gonzalo before and the last time I actually lost to him. I knew how dangerous he was and knew he deserved a lot of respect. I prepared really well and I enjoyed every moment of it.”