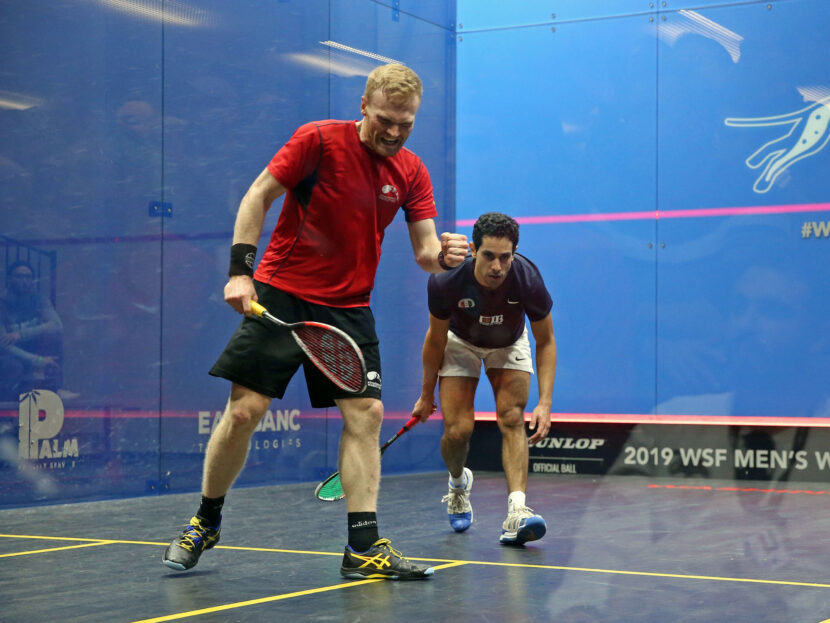 Defending champions Egypt look to continue their title defence as they take on Wales in the semi-finals of the WSF Men’s World Team Squash Championship today in Washington DC.

Egypt are yet to lose a tie yet, but they will face a tough battle with underdogs Wales who have produced some enthralling squash to play above their seeding so far this week, reaching their first semi-final since 1999.

World No.12 Joel Makin put on a showstopping performance to down reigning World Champion Tarek Momen in a stunning five-game encounter and put Wales 1-0 ahead in their tie with Egypt.

Wales were very much the underdogs going into the tie, but Makin showed that his side were not there to make up the numbers as he stunned defending champions Egypt with an imperious performance in Washington DC.

The two players are no strangers each other having played three times previously all on the PSA World Tour, with the last match coming just six weeks ago when Makin defeated Momen at the CIB Egyptian Squash Open and the Welshman continued that run.

Two tight opening games went one apiece, before Momen seemed to completely close his concentration in the third with Makin strolling to a 11-2 finish. The Egyptian World No.4 came back in the fourth strongly though to draw back level.

“In the fifth I just had to get back to that solid base that I had at the start of the match,” said the 25-year-old Welshman afterwards.

“I let him go way too easily in that fourth game and he got a really quick lead. I needed to get back to basics and get the middle back off him and then take it in when I wanted to and not be so reactive.”

Gawad Puts Egypt Back on Track

Gawad had only faced Creed once before when he defeated the Welshman at the Andorra Open back in 2015 and the Egyptian once again was on song to level the scores for Egypt in their tie against Wales.

A tight first game went in the favour of the former World Champion, before Creed eventually succumbed to the attacking pressure of the talented Gawad which saw him claim a 12-10, 11-3, 11-7 win.

Abouelghar Sees Egypt Through to Final

World No.8 Mohamed Abouelghar defeated Wales’ Emyr Evans in four games to put Egypt through to the WSF Men’s World Team Championship final where they will face either France or England.

The pressure was on Abouelghar in the final match of the tie following Momen’s earlier loss to Welsh No.1 Makin. ‘The Bullet’ was pushed by an inspired Evans, who made life difficult for the Egyptian, particularly in the third as he took the angles away from Abouelghar to cause him to make errors with his strong straight-line play.

Ultimately, it was not meant to be for the Welsh team though as they fell to the defending champions who proved too strong in the end, with Abouelghar sealing the victory by an 11-7, 11-7, 8-11, 11-7 scoreline to reach his first final at the tournament.

“I’m feeling great,” said Abouelghar afterwards. “it was an incredible first match from both Tarek and Joel, so I thought I have to get ready and I knew they were going to be on fire today with nothing to lose.

“I had a lot of pressure on my shoulders, but I’m very happy with how I dealt with it and very happy to get us through to the final.

“After the third game I thought I would have to get back to basics and not rush. He was going for everything and it was all paying off, I just had to be accurate and stay with him.”