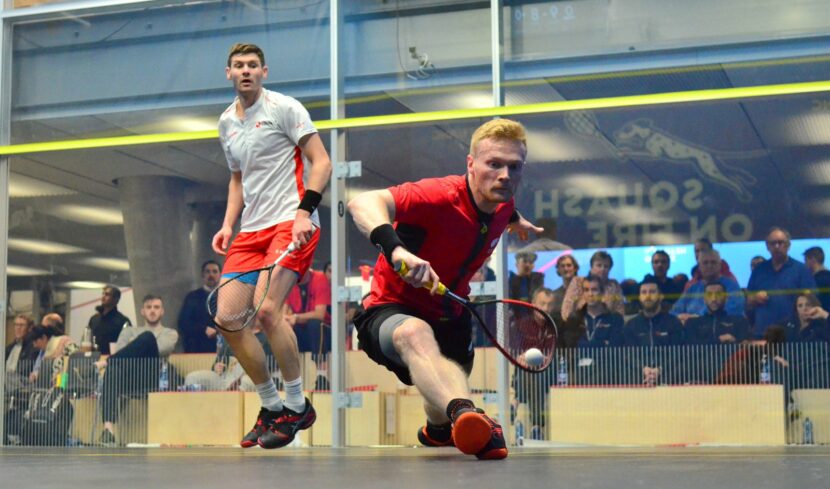 Daryl Selby gave England the early lead against Wales, thanks to a comfortable victory over Owain Taylor, who was featuring for the first time in the tournament.

Selby took the first two games with relative ease, winning them 11-6 and 11-7 respectively, before Taylor mounted a comeback in the third game.

The Welshman held the lead, and then went on to save several match balls, but Selby eventually got over the line to put England in front in the tie.

Former World No.1 James Willstrop had to fight to get past Welshman Peter Creed, with the victory taking England into an unassailable lead over their rivals.

Willstrop seemed to be in complete control of the match after two games, as he took the pair to go 2-0 up, but Creed came fighting back.

The Welshman won both the third and the fourth by an 11-9 scoreline to pile the pressure on the Englishman. However, he responded, to give the No.2 seeded nation the victory in the match, and the tie.

“I feel a bit relieved, because that was really important. I got into a bit of a mess in the middle of that match, because I got really ropey,” Willstrop explained.

“I had to play really well at times but I lost it in the middle. The teams stuff adds an extra dimension and it was all there tonight. That was one of the most pressurised situations that I have been in for a while, because you know you have to get it done for everyone else as well.”

England’s No.1 seed Adrian Waller overcame a tough challenge from World No.12 Joel Makin to seal a clean sweep for his country over Wales.

All four games were close, with Waller taking the first two games by an 11-9 scoreline to take a commanding lead in the match.

The Welshman fought back to win the third game by the same scoreline, but Waller took the fourth 11-8 to secure the victory for England, giving them a whitewash over the Wales side.

Argentinian No.3 seed Gonzalo Miranda got the better of South Africa’s Gary Wheadon to put his country into the early lead in their Pool E clash.

Miranda took the first game on a tie-break, and it looked as though he held the momentum, but the South African fought back to tie the match at one game apiece.

However, it would be the Argentina side that would take the 1-0 lead in the tie, as he won the next two games to end the match in just over 50 minutes.

Leandro Romiglio won the second match between Argentina and South Africa to his give his country the overall victory in the tie.

Romiglio followed on from where Miranda left off, allowing Christo Potgieter just four points in the first game. Although the South African tried to battle back, the Argentinian had too much for him, claiming the victory in forty minutes.

Jean-Pierre Brits put South Africa on the board after he defeated Robertino Pezzota in the final rubber of their tie with Argentina.

Brits won both of the first two games on a tie-break, 13-11 and 12-10, to take the momentum and a commanding lead in the match, but it was not to be a comfortable finish.

Pezzota then won the next two games, with the South African scoring just seven points across them, but he recovered to win the final game, giving South Africa their first match of the week.

David Baillargeon got the better of Adewale Amao in the first match of the tie between Canada and Nigeria, giving the North American nation the lead.

The World No.106 took the first two games, both in very tight fashion, 11-9 and 12-10, to wrestle the momentum in the match, before then allowing Amao just three points in the third as he closed out the match.

Nick Sachvie secured a victory for Canada over Nigeria as he got the better of Sodiq Oluwatobi Taiwo in straight games at the Squash on Fire complex.

The Nigerian started well, but it would be Sachvie who took the momentum through the middle part of the game, going on to take it 11-7.

He then carried that momentum on throughout the rest of the match, winning both the second and third games to seal a 3-0 victory, and give his country an unassailable two match lead.

Shawn DeLierre made it three wins out of three for Canada against Nigeria, as he battled back from behind to defeated Babatunde Ajagbe.

The Canadian No.1 seed took the first game on a tie-break 14-12, but then proceeded to fall 2-1 down, after Ajagbe played some great squash in the second and third game.

However, it would eventually be DeLierre that took the win, as he came back to win both the fourth and fifth games to take the 3-2 victory, rounding out a 3-0 overall win for Canada.