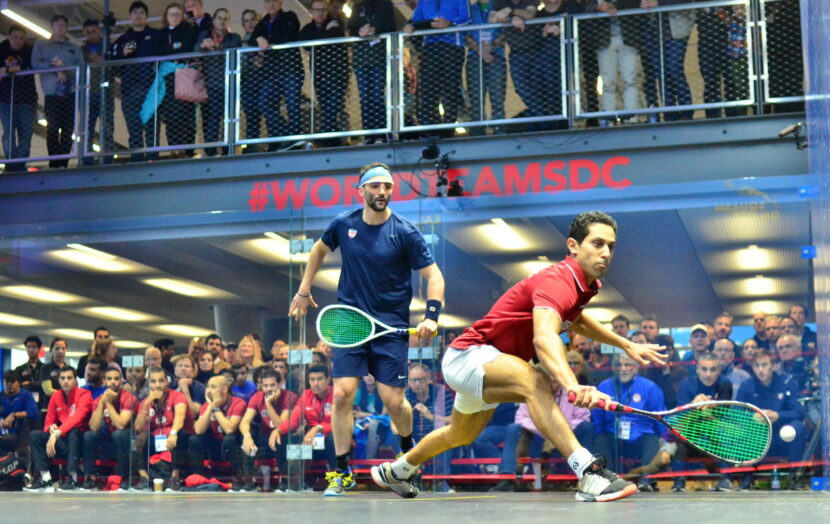 Firm favourites Egypt eased through their opening tie in the WSF Men’s World Team Squash Championship in Washington DC – but hosts USA did not make it easy for the title-holders in front of a partisan home crowd surrounding the all-glass showcourt at Squash on Fire.

The biennial World Squash Federation championship is being staged in the USA for the first time in its 52-year history. 23 nations are competing in the 26th edition of the event, hosted by US Squash, at Squash on Fire, the new state-of-the-art eight-court facility in the US capital.

Egypt fielded a full-strength team for the eagerly-awaited opener in Pool A – featuring Ali Farag, Karim Abdel Gawad and Tarek Momen, ranked 1, 3 and 4, respectively, in the world.

Their US opponents were not only ranked considerably lower, but each had never before faced his American opponent.

In the following battle between the top strings, Todd Harrity dropped the first two games as world No.1 Farag, a former Harvard graduate, powered ahead. But US champion Harrity thrilled the crowd by fighting back to take the third and reduce the deficit.

There was excitement in the third string when event debutant Andrew Douglas, a 21-year-old from New York, took the opening game against Gawad, the PSA World Tour Finals champion. But, again, the home player was unable to maintain the momentum as the Egyptian raised his game to close out the match 8-11, 11-9, 11-8, 11-6 and give his country a 3-0 win.

“I’m really pleased with our start,” said Farag afterwards. “We had a strong team in front of us in the USA – Todd has been playing well so it was good to get that win myself and also for Tarek to give us that head start.

“It’s good to get the first win under our belt.

“Having the likes of Karim, Abou and Tarek next to me gives me a lot of confidence and a lot of things to look up to. We lift each other up and hopefully we can bring home the title.”

US national coach Paul Assaiante was upbeat about his team’s performance: “We played three people who have all been world champions.

“We had a couple of guys coming off some injuries and we were hoping they could play their way through – and in all cases I think they felt better about themselves coming off the court. All three guys came off the court with their eyes a little bigger! They did a really nice job – I’m very proud of them.

“It was a super crowd, very appreciative of the squash from both sides.

“And now we have Switzerland on Tuesday. Today they played with no pressure – and on Tuesday it’ll be all pressure, against a team, in the United States, that on paper we should have a chance against! Today was fun; on Tuesday it will be less fun.”

There was much anticipation in the Pool C tie between France and Colombia, as it marked the return after a 14-month injury break of the French former world No.1 and World Champion Gregory Gaultier.

The ‘French General’ appeared to back to his former form as he despatched Colombian Ronald Palomino 11-1, 11-5, 11-2, before his team-mates Gregoire Marche and Baptiste Masotti made it a maximum points win for the third seeds with straight games wins over Juan Camilo Vargas and Erick Herrera, respectively.

“It has been a really tough year for me after having two surgeries,” explained Gaultier, who is celebrating a record tenth successive appearance in the championships. “My second surgeon did a great job and gave me the hope to play squash again. It was still 50-50 a couple of months ago between doing no sport and being able to do something. All the work I have been doing with my physios and all the work I have put in every single day has been worth it.

“It’s an amazing feeling, it has been 20 years playing for my country and playing in this shirt for my first match means a lot to me and it has always been an honour. We will see how it goes, we have a pretty solid team and we are looking forward to doing something good.”

But it was the third string clash which caught the imagination of many of the event’s followers – when Kiwi Evan Williams, a 30-year-old ranked 93 in the world, took on Steve Richardson, an Irishman who has not only never played a match on the professional tour, but is aged 47.

The event’s oldest participant made his debut in the championships in 1995 – before anybody in the 2019 field – and is undoubtedly one the game’s most capped internationals. Richardson kept his opponent on court for 33 minutes, but ultimately went down 11-7, 11-7, 11-5.

“I wanted to come here and compete,” explained the 2002 Irish champion. “I’m competitive in matches but physically we’re on different planets these days! I’ve got to realise that when I’m in matches I’ve got to stop it being a physical contest and make it more a mental contest.

“It’s good to able to compete – but it’s also about priorities. I still want to come here and do my best – the only difference between a professional and an amateur is the time to prepare. It doesn’t make them better squash players!”

On making his World Teams debut for Ireland in 1995, Richardson said: “It doesn’t seem like 24 years ago – it seems more like 10!

“The difference between me and the other guys is that Squash is fun for me – it always has been and always will be.”

Australia are the 2019 event’s seventh seeds and expected to finish in second place in Pool F. But the record eight-time champions were shocked in the opening match of their tie against Kuwait when the 21st seeds’ second string Abdullah Al Muzayen beat former world No.11 Cameron Pilley 11-7, 11-6, 11-5.

The 33-year-old left-hander from Kuwait City has been hampered by political issues back home and has competed in just one international event over the past 18 months – resulting in a drop in his ranking to 512. But the former world No.33 showed signs of his former self as he stunned Pilley in one of his best scalps in several years.

“I played well,” admitted underdog Al Muzayen. “This is one of my best wins, for sure, and it will give me a lot of confidence.”

Order was restored for Australia when Ryan Cuskelly and Rex Hedrick both recorded straight games wins to give the 7ths seeds a 2-1 victory over Kuwait.

England, expected to reach the final for the fourth time in a row, faced Canada in their opening tie – an encounter which turned out to be the nations’ 10th meeting in the championships since 1983. Captain Daryl Selby led the five-time former champions to a 3-0 win, beating Nick Sachvie 11-3, 11-8, 11-4 in 35 minutes.

“Any time you can captain your country it fills you with pride,” said Selby, the 37-year-old former World No.9. “I’ve been playing for more than 30 years and I’ve done it a few times at the Europeans, but this is the first time at World Championships.

“We’ve got a great team with a really good spirit, I say a big team, but I feel small in this team – they’re all over 6ft and I’m the little guy which doesn’t happen very often! We’ve got a lot of heart and we won’t be easy to beat this week.

“Nothing is won on paper. Sport is a beautiful thing, you can say this team is going to beat that team but it doesn’t always happen like that. A team championship is different and there are a lot of good teams out there, not just us and Egypt. It’s a going to be a tough and good week and I think there are going to be fireworks this week.”

Action from the WSF Men’s World Team Squash Championship continues tomorrow (December 16) at 12:00 local time (GMT-5) with all matches shown live on the official Facebook page of the Men’s World Team Championship. For more information on the tournament, follow the event on Twitter, Facebook, Instagram, or visit www.worldteamsquashdc.com.

1st qualifying round – Pool A: