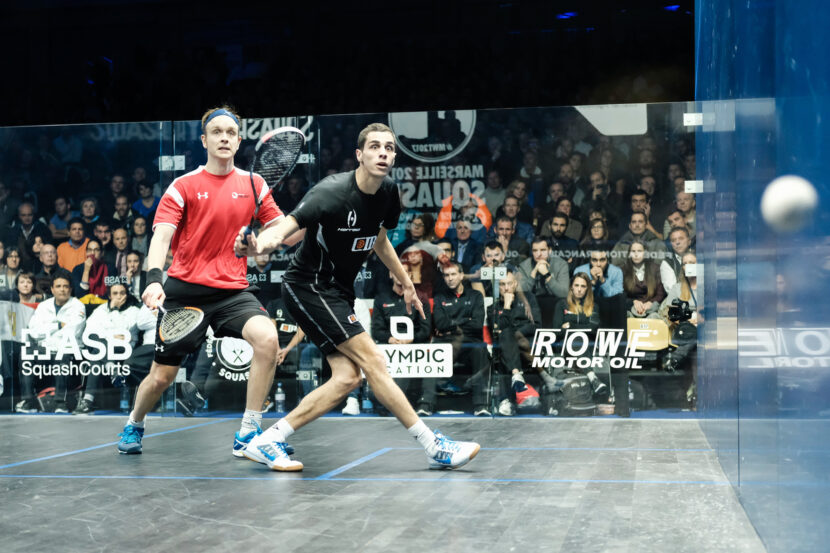 Ahead of the WSF Men’s World Team Squash Championships in Washington D.C., which starts on Sunday December 15, take a look back at the story of the 2017 event, which saw Egypt lift the title.

24 teams were split into eight pools of three, with the top two teams advancing from each pool to the last 16 of the competition.

There were no real surprises from the group stages, with the seeded nations all making it through, including the top seed Egypt, title holders England and hosts France.

Hong Kong and Spain advanced from Pool E, while New Zealand and United States battled into the knockout stages from Pool F. Pool G saw Germany and Scotland qualify for the last 16, with India and Malaysia making it through from Pool H.

Due to Malaysia winning Pool H, it meant that No.8 seeds India had to face No.7 seeds Germany, and it was the Indian team that went through, as Mahesh Mangaonkar downed Valentin Rapp in the final rubber of their tie.

Elsewhere, Egypt, France, Hong Kong, New Zealand, Australia, England and Scotland all took victories to advance to the last eight of the tournament.

The quarter finals pitted Egypt against Scotland, with the No.1 seeds wasting no time in booking their spots in the semis, as Karim Abdel Gawad, Ramy Ashour and Marwan ElShorbagy all took victories. England also got the better India without losing one of their matches, but it was more difficult for both Hong Kong and Australia.

In Hong Kong’s clash with France, Max Lee lost out to Gregory Gaultier in the first rubber, but victories from Tsz Fung Yip and Leo Au were enough to send the Asian nation through to the last four.

Meanwhile, in the antipodean battle between Australia and New Zealand, Paul Coll took the first match to give the Kiwis the early lead. From there, Zac Alexander and Cameron Pilley took vital wins over Evan Williams and Campbell Grayson to give Australia the 2-1 victory in the tie.

The top two seeds would go on to set up a clash in the final, with both Egypt and England winning their respective ties against Hong Kong and Australia after just two matches. ElShorbagy and Gawad took Egypt to the win, while Daryl Selby and Nick Matthew helped England to advance.

The first rubber of the final saw Karim Abdel Gawad take on Nick Matthew, with the ‘Baby-Faced Assassin winning in straight games. Ali Farag then produced the same result over James Willstrop in a battle of the future and former World No.1s to complete a resounding victory for Egypt, their fourth at the Men’s World Team Squash Championships.